The End by Mark Tufo
My rating:

“That’s why therapists are (were) some of the most screwed up people on the planet. It’s impossible to listen to that many people with that many problems and not begin to inherit more than your fair share of them. Just think about it.” 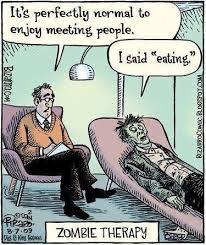 Okay, so when I started this, the third volume of the Fallout series, I was a little disappointed. Where was Michael and all his sarcasm? Oh right, he’s disabled and nearly dead in a bed somewhere. So we get Brendan’s story instead. You remember that guy – the daughter’s fiance that had a hissy fit in the last book and, after promising Michael to take care of the family if anything happens to him, runs away because he’s scared of Eliza, vampire queen of the zombies, who is stalking Michael’s family.

Well, okay, one can hardly blame him for being a little freaked out. She’s a scary critter. But still, I was pretty disconcerted by his disappearance in the last book after the promise he made, and was annoyed now because I was mad at him and didn’t want to read his story, despite him sort of redeeming himself in the end of the last book.

I found the start to be boring and pointless. I really didn’t care and almost stopped reading, but when I skimmed ahead I noticed it wasn’t too long before we got back to interesting entertainment, so I plodded on. If you don’t care, feel free to skip this entire portion of the book. It has no relevance to anything that happens afterwards and is basically never mentioned again. It might have worked better as a between-books novella for anyone who really cared about the guy, but for me? Ugh.

This book does explore Eliza’s backstory a bit more (and Tommy’s as well, as it relates to her). You learn about their twisted history and why she’s so bound and determined to get her hands on him. You get to find out what happened to the split party from Little Turtle as well, after they left to head south.

To be honest, this book is kind of all over the place. It’s not tied together super well, and that gets a little annoying. I was still entertained, and did have a few laughs, but fewer than in the previous books.

Also, while I complained about the poop and fart jokes that were so prevalent in book two – those seem to have calmed down a bit. But only because they’ve been replaced by a ridiculous amount of puke-related jokes and dialogue. Which is, for me at least, infinitely more disgusting. I did a lot of skipping those passages.

Neither book two nor book three recaptured the fun I had with the first in this series, but there are a bunch more books. I’m torn between wanting to read them immediately to see if I can get that thrill back, or taking a break and then coming back to see if at that point it seems fresher and newer again. I think I’ll be going in the latter direction, though I still have hope.