The Eye of Minds by James Dashner
My rating:

“Who knows the true definition of real?”

Michael and his besties, Sarah and Bryson, are gamers.

Except now it’s the future, and instead of a console you get a coffin. Yep, you lie inside and all kinds of weird nerve fibers pierce you all over, and you can get supplemental nutrients supplied to you (if you’re eating in-game, of course) and can do your business there (while you do it in-game, natch) and it’s so very, very creepy and terrible and probably exactly what is going to happen in the future, where we’ll all be plugged into our games all the time.

Okay. So the main game platform is a sort of Sims-like world, where you can hang out and eat pizza with your friends, which is what Michael and Sarah and Bryson do. Then there are offshoot games, which you can walk over to and physically enter – first person shooters and the like. But the main world, it’s very much just The Sims or Second Life, and that seems to be where these three friends spend most of their time, fairly innocuously.

But there’s a new gamer on the scene, and he’s doing some serious hacking. He’s somehow figured out how to hack into people’s heads, to change the game controls so that he can cause brain damage and death in the real world, and can also keep people from returning to their bodies, trapping them in the virtual reality world forever. He’s bad.

And because this is a book, a group of teenage friends with moderate hacking skills of their own are tasked with finding the hacker – Kaine. That might not be the most realistic plot point, but at least the characters themselves are aware of it enough to boggle over these facts, which made me laugh a bit. 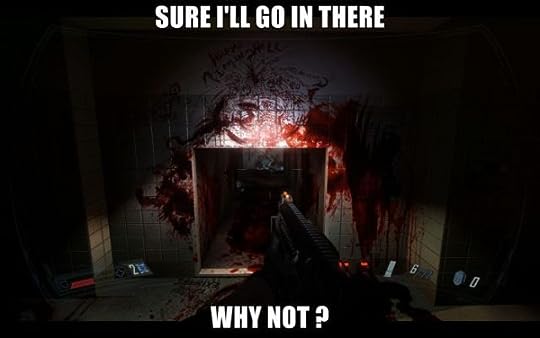 “He let out a short laugh. “You sound like Sherlock Holmes. You gonna pull out a magnifying glass? A pipe, maybe?”

This book is a pretty fun trip into a weird dystopian world. If you’re a gamer (even a casual one, like me) you’ll probably enjoy this. There’s a lot of action, but only a bit of gore, and nothing I was forced to skim, for those who know my violent-scene-skipping tendencies. The author, should the name look familiar, is the same fellow who penned The Maze Runner series, and he’s a damn good storyteller. He doesn’t write the prettiest prose in the world, but he can spin a yarn that draws you in and doesn’t let go.

The Eye of Minds is a very quick, entertaining read. It’s not high literature (nor is it meant to be), but it’s certainly fun. I really enjoyed it and am looking forward to picking up the next two books in the series, soon!