In the Unlikely Event by Judy Blume
My rating:

“Life is a series of unlikely events, isn’t it? Hers certainly is. One unlikely event after another, adding up to a rich, complicated whole. And who knows what’s still to come?”

Let me start off by saying that as a girl, I adored Judy Blume. I read her books over and over, including Wifey, another adult book of hers. I thought she was the best, because she talked frankly about real issues and real life and said things that other adults didn’t say to kids – at least not when I was a kid.

I was on the waiting list at the library for a long, long time for this book – about six months or so. I really, really wanted to read it. And then I started it and… well?

The first 100 pages or so are incredibly tedious.

There are a ton of different characters that narrate here. At some points I found it almost impossible to keep track and forgot who was who. It was distracting, even though I usually love books that have differing points of view. The voices were just not distinct enough for me, the characters were not vibrant enough, different enough to bring it to life to the point where I was anticipating the next chapter from this person or that person.

The time period seems authentic enough to me – I didn’t live through the fifties so I can’t say for sure, but it certainly reminded me a lot of 1950’s TV shows I would watch obsessively as a kid. That said, I’m very aware that those shows were not “reality” for most people of that era. This seemed to be heavily invested in nostalgia to charm readers. Since I have no warm feelings about that time period, it didn’t really work for me. 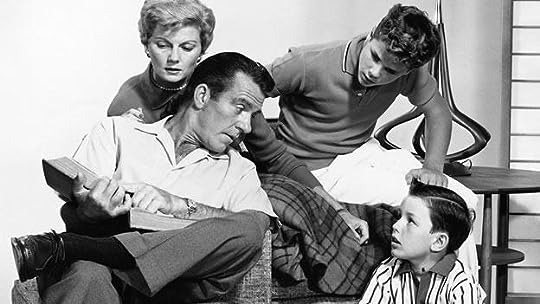 I thought the premise was interesting – a series of plane crashes in a smallish town in New jersey in the fifties caused the local airport to be closed, and for various theories to abound as to what was really going on. And the fact that the author lived through that time? I thought it would lead to an incredibly colourful piece. But this is more coming-of-age story than anything else, which is fine, I like those stories. It just wasn’t what I was expecting here.

I kept waiting for the payoff, for something more interesting to happen. And I’ll admit it, as the story went on I got more invested in Miri’s (the main character) life and her story. There’s a little first-time romance, there’s a little disillusionment of the fairy-tale ideal she held her older family members to, there’s a little finding herself and learning about herself. And that brought my star rating of this book back up a bit, because I was solidly in the 2-star region for the first part of the book.

If you are really into 50’s nostalgia, especially coming-of-age stories set in that period… well then you should go read The Body, by Stephen King (the inspiration for the movie Stand By Me).

But you also might like this book. I thought it was OK. It was a long, slow read for me. I brought it with me on vacation and it was not a good pool-side read. It would be better, maybe, in short bursts when you don’t find staring at the sun/pool/other people more interesting and distracting. Like in waiting rooms or the like.

4 Comments for “Book Review – In the Unlikely Event”

We have quite different reactions to this book, I really liked it, maybe because of the time period which I lived through. The interesting part was that she based a lot of it on things that really happened in the period, including all the plane crashes in New Jersey. Sorry you didn’t like it, because I really did.

Yeah, I saw that you reviewed it highly on GoodReads. It just didn’t work for me – and as i stated in my review, the nostalgia angle didn’t hit me, probably because I don’t have a connection to that time period. On the other hand, I’m reading a book now that is a family drama that takes place in the 50’s – 60’s and absolutely adore it.

Aww, that’s disappointing. I also loved Judy Blume as a teen, especially Tiger Eyes. I still pick it up from time to time and recently bought the new film version, which was okay, but not as compelling as the book. At least In The Unlikely Event had a few redeeming features!

It did; and I didn’t hate it, I did bring it up to three stars. I just wasn’t crazy about it, and was disappointed because I had such high hopes. I might have to look for the Tiger Eyes movie…