Subterranean by James Rollins
My rating: 3 of 5 stars

“In a plane again, Ashley thought sourly, her nose pressed to the window. Down below, glacier fought granite from horizon to horizon. This was the final leg of the two-day journey. Yesterday, they had flown the eight hundred miles from Buenos Aires to Esperanza, the Argentine army base on the tip on an Antarctic Peninsula. There, Ashley had her first taste of Antarctic air – like ice water poured into her lungs.” 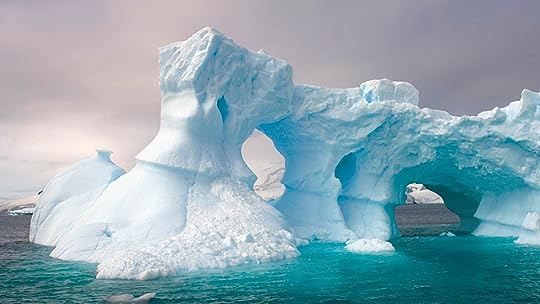 As part of my reading challenge this year, I’m supposed to read a book set on (or written by an author from) each continent. Including Antarctica. And as I watched other people in my group pick science books about research at the science station there, or sports books about people who for some godawful reason have chosen to walk, run, or cross-country ski the continent, I was disconsolate. I live in Canada. I have enough ice and snow already.

But then I poked around on Google for an hour or so, and came up with this little beauty of an action thriller by James Rollins. Much more my style. And definitely a fun, fast-paced, interesting read.

A team of researchers has been assembled to investigate a series of caverns under a military base in Antarctica. There has been a discovery of cliff-dwelling style housing inside of the cavern, as well as a fertility figurine carved from a single, large diamond. So Ashley, the archaeologist has been summoned, along with a geologist, a biologist, a caving expert, plus a military consultant and two navy seals (for protection/safety).

And then the fun starts. There’s plenty of intrigue and back-stabbing and danger and scary moments in the dark, and freaky fungus that might attack you and glow-in-the-dark fish, and bad guys, and weird evolutionary turns that species have taken, like carnivorous snails and flying lizards and seriously this would make an excellent action movie because I am already out of breath describing it.

There are also plenty of icky parts. If you have a weak stomach, this is probably not for you.

“The space between the next two buildings was crowded with four torn bodies, limbs shredded from torsos, intestines strewn like party streamers. Suddenly one of the torsos jerked into the darkened alley beyond, dragged by something hidden in shadow.”

This book is kind of like Jurassic Park meets Sanctum.

There’s even a kid in peril. And it may be the only time a Gameboy saved someone’s life in a book (Can’t be certain on that one, but it’s certainly the only one I’ve seen!).

But there are reasons I only gave it three stars. There’s a romance afoot, and some of it is so incredibly awkwardly written that I laughed out loud. In places I clearly wasn’t meant to.

“Anytime, love,” he whispered in her ear, then brushed her cheek with his lips.

She blushed and glanced away. “We’d… uh… better get going. Michaelson’s waiting.”

He turned back to the wall and continued. She watched him climb with the ease of a mountain goat, his legs spread wide. She had to force her eyes away before she could continue, her cheeks still flushed.

A mountain goat? Really? Okay, she just really doesn’t think about men like most women I know, which could be due to her character being written by a man, but I generally give authors more credit than that. But that’s only one example. There are several. So that particular aspect of the book didn’t work for me very well, and broke me out of the “spell” of the book from time to time.

Overall, though, this was a fun read and very hard to put down once I hit about the halfway point.