Raven by Lauren Oliver
My rating:

“Today, I go east. It’s one of my favorite times of day: that perfect in-between moment when the light has a liquid feel, like a slow pour of syrup. Still, I can’t shake loose the knot of unhappiness in my chest. I can’t shake loose the idea that the rest of our lives might simply look like this: this running, and hiding, and losing the things we love, and burrowing underground, and scavenging for food and water.
There will be no turn in the tide. We will never march back into the cities, triumphant, crying out our victory in the streets. We will simply eke out a living here until there is no living to be eked.”

It’s been a little while since I read the last book in this series. I really loved it, but needed a break from YA dystopia, which is pretty much the biggest chunk of what I read last year. I did tell myself I’d finish up this series before grabbing any more YA dystopia from a shelf, and then I went and forgot and read The Selection for one of the slots in my 2016 Reading Challenge and realized I’d never discovered the endings of the stories for these characters.

So, grabbed this eBook from the library website last night and drove right through it pretty quickly (it’s very short). This tale is primarily a re-telling of the pivotal rescue-of-Julian scene from Pandemonium, told from Raven’s point of view. There are also bits of Raven’s early life in the wild, told in flashback, and a huge, enormous revelation that may (or may not, who knows) completely change the character’s life in the next book.

I had hoped for more of Raven’s back story than I got, as she’s one of the more interesting characters from the series. I knew some of her story from the rest of the series, of course, but it’s so much more tragic coming from her in this way.

“I learned to tell stories from my mom. “Your dad’s not feeling well today,” she’d say. I had an accident. She’d say, Remember what happened. You’re a clumsy girl. You walk into a door. You tripped and stumbled down a staircase. My favorite story: He doesn’t mean to.
She was so good at telling stories that I started to believe them after a while. Maybe I was clumsy. Maybe it was my fault for provoking him.
Maybe he didn’t really mean to.”

Previously, I’d complained about a re-telling of a scene through one of the between-books novellas in this series (of course, that one had been re-told twice, so you’d seen it three times by then), but at this point it’s been such a while since I read Pandemonium that I was okay with the re-telling. I feel like it reminded me of so much, and got me ready for reading Requiem, the last book in the series. I grabbed that one from the library eBook selection as well, and will be diving into it soon.

I really hope Raven gets her dream. It’s such a sweet and lovely wish, and it breaks my heart that she might not get to live it, after all she’s been through. 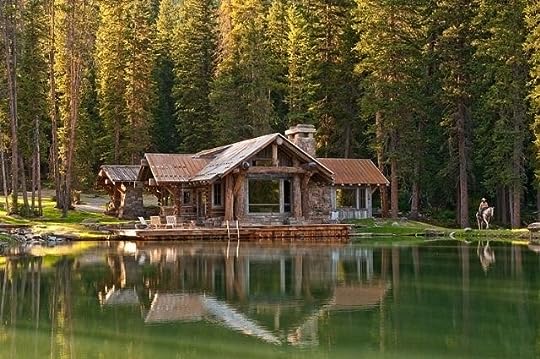 “Recently I’ve been having the fantasy more and more, the one where Tack and I run away, disappear under the wide-open sky into the forest with leaves like green hands, welcoming us. In my fantasy, the more we walk, the cleaner we get, like the woods are rubbing away the past few years, all the blood and the fighting and the scars – sloughing off the bad memories and the false starts, leaving us shiny and new, like dolls just taken out of the package.

And in this fantasy, my fantasy life, we find a stone cottage hidden deep in the forest, untouched, fitted with beds and rugs and plates and everything we need to live – like the owners just picked up and walked away, or like the house had been built for us and was just waiting all this time.

We fish the stream and hunt the woods in the summer. We grow potatoes and peppers and tomatoes big as pumpkins. In the winter we stay inside by the fire while snow falls around us like a blanket, stilling the world, cocooning it in sleep.”