Paris by Edward Rutherfurd
My rating: 4 of 5 stars

“Paris. City of love. City of dreams. City of splendor. City of saints and scholars. City of gaiety.
Sink of iniquity.
In two thousand years, Paris had seen it all.

This is a very long book. If you are, maybe, trying to do a very long book challenge and choose this as your first book, you will very shortly begin to feel like you will never, ever finish it and will fall behind in your challenge and will be reading this book for the rest of your life, only you’ll like the book so much that you won’t care that you’ll be reading it forever. Not that this happened to me, or anything.

Paris is a sweeping, multi-generational drama that follows several French families through the history of the city of Paris; the working class Gascons, the aristocratic De Cygne clan, the socialist line of the Le Sourde, the Jewish working class Jacobs, the bourgeois Blanchard family, and a few others that move in and out of time with them. My favourite story was that of Thomas Gascon, and his working-class family from the slums of Montmartre, mainly because his tale of working on the Statue of Liberty and Eiffel Tower were positively fascinating. There is so much history in this book; if you aren’t interested in learning hundreds of years of French history, this book is not for you. 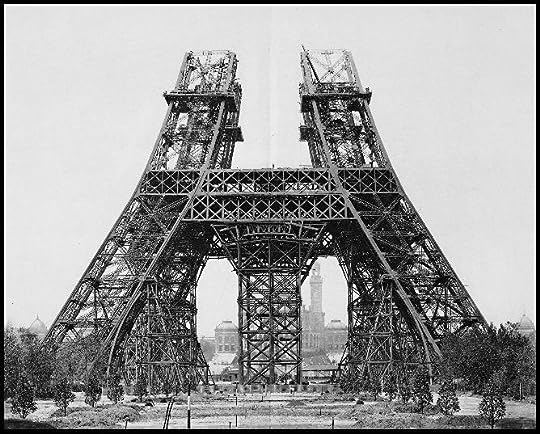 I often find historical fiction that weaves in so much actual history to be terribly dry, but not here. Here, as history is told through the lives and tales of the characters, it’s full of drama and interest. Sometimes it’s necessary for one character to school another through a long story-telling passage; these are not the best parts of the book, though I understand why the author chose this. It’s a compact way to get a lot of information across quickly, such as explaining the Paris Commune and the executions that followed the French Revolution, which is explained to a son by a mother telling the tale of the boy’s father. It’s expedient. But also kind of boring, which is why I’m glad this isn’t overused in the book.

“About the nobles—not just de Cygne, all of them. They don’t care. Just remember that. Do what you have to do with them, because they have the power. I don’t know if they’ll always have it, but they do now, and they’ll have it as long as you live, my son. So don’t ever go against them. But just remember, no matter what they say, don’t ever trust them. Because they don’t care about you, and they never will, because you’re not one of them.”

My only issue with the storytelling is the fact that this book moves back and forth through time. I also understand why the author did this; he wanted to time certain revelations about connections between the families to enhance the drama of it all. And it worked, for that measure, but it also was very, very confusing. Because the story is so long and there are so many characters with similar first (and the same last) names, I started to lose track of certain storylines. I had to go back and forth and figure out what I was actually reading, where I was in time, what family this was again… the is less problematic by the end of the book, where things move more or less in a forward direction in time, but early on it definitely confused me.

“Love might come suddenly, unsought, from a place not looked for, and stay for a while before departing into the distance, to a place where it cannot be reached.”

The prose in this book is beautiful. It is rich and detailed, and plays nicely against the background of the historical city and the art and artists featured in the book. I would say this is a character-driven novel, but only if you consider the city as the primary character in the book. Otherwise, the characters really are there to serve the purpose of exposition. Usually I hate that, but it worked for me, here.

One thing that really struck me from this novel is how awful people are to one another in the name of religion. Whether the protestants are being murdered in the streets or the Jews are being rounded up and sent either out of the country or into prison camps, or the Catholics are being beheaded in a square, it’s extraordinary to me to see how extensive religious prejudice has been against the background of history. It’s shocking to look back on, and sad to realize how little the world has changed, considering things going on today.

This book is an excellent view of history, a beautiful tale of the character and life of Paris.