Fried Green Tomatoes at the Whistle Stop Cafe by Fannie Flagg
My rating:

“I wonder how many people don’t get the one they want, but end up with the one they’re supposed to be with.”

I remember when the movie, Fried Green Tomatoes, came out. I remember buying the video because I’d fallen so in love with it. I watched it over and over and wore out the VHS tape. I bought another.

I was in love with Idgie, and with Ruth, and with their love story. I was in love with the town of Whistle Stop and all of it’s characters/residents. So when a friend saw that I was doing the 2016 Reading Challenge and that one of the categories was a book where you’d seen the movie but hadn’t read the book, and she suggested this book, I leapt at the chance.

Now, at this point it’s been several years since I’ve seen the movie (probably ten, maybe more!). I had never forgotten the story, but it was hazy enough that the book felt fresh and wonderful to me.

I am still in love with Idgie and Ruth and their love story. I think it’s one of the most beautiful love stories around.

“It’s funny, most people can be around someone and they gradually begin to love them and never know exactly when it happened; but Ruth knew the very second it happened to her. When Idgie had grinned at her and tried to hand her that jar of honey, all these feelings that she had been trying to hold back came flooding through her, and it was at that second in time that she knew she loved Idgie with all her heart.”

The book goes even more beautifully in-depth with their love story, where the movie danced around it a bit – a product of the era it was produced in, I suppose. But while the movie made you constantly wonder if they were just really close friends, the book lays it out plainly. They were in love, madly in love, beautifully in love. One of the best parts of reading the book, for me, was being able to see how they gloried in their time together once they were able to throw off the expectations of society (for Ruth) and just be together.

Something interesting, too – in the movie, it was constantly implied that Ninny – the elderly lady telling the tale – and Idgie were the same person. But in the book it makes it very, very clear that they are not the same person – though they come from the same family, Ninny having been married to one of Idgie’s brothers. Which makes the ending of the movie rather different than the book. The book made my heart ache and made me incredibly sad, even though the message of the book is one of hope.

Being in a different place in my life now, I suddenly related to the character of Evelyn a whole lot.

“It’s funny, when you’re a child you think time will never go by, but when you hit about twenty, time passes like you’re on the fast train to Memphis. I guess life just slips up on everybody. It sure did on me.”

Evelyn of course, being the woman that Ninny tells her story to, the story of Whistle Stop and of Ruth and Idgie, and the entire cast of characters that fills out the whimsical little town. 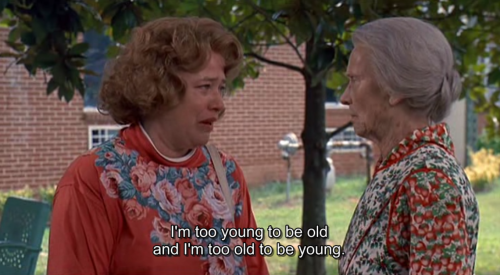 Lost in her 40’s, feeling directionless, feeling helpless, and not really knowing herself very well, Evelyn learns to live again through the stories of the people at Whistle Stop and the unfailing encouragement of her new friend, Ninny. And while I’m not in quite as hopeless of a place as Evelyn, I could relate much more than I could as a teenager!

“Lately, it had been an endless procession of long, black nights and gray mornings, when her sense of failure swept over her like a five-hundred-pound wave; and she was scared. But it wasn’t death that she feared. She had looked down into that black pit of death and had wanted to jump in, once too often. As a matter of fact, the thought began to appeal to her more and more.

She even knew how she would kill herself. It would be with a silver bullet. As round and as smooth as an ice-cold blue martini. She would place the gun in the freezer for a few hours before she did it, so it would feel frosty and cold against her head. She could almost feel the ice-cold bullet shooting through her hot, troubled brain, freezing the pain for good. The sound of the gun blast would be the last sound she would ever hear. And then… nothing. Maybe just the silent sound that a bird might hear, flying in the clean, cool air, high above the earth. The sweet, pure air of freedom.

No, it wasn’t death she was afraid of. It was this life of hers that was beginning to remind her of that gray intensive care waiting room.”

This book is very life-affirming, even with the inevitable deaths of characters (after all, the book spans from the 1920’s through the 1980’s and even the best characters aren’t all immortal).

“Mrs. Threadgoode laughed at the thought. “Oh honey, I’ve buried my share, and each one hurt as bad as the last one. And there have been times when I’ve wondered why the good Lord handed me so many sorrowful burdens, to the point where I thought I just couldn’t stand it one more day. But He only gives you what you can handle and no more … and I’ll tell you this: You cain’t dwell on sadness, oh, it’ll make you sick faster than anything in this world.”

“… but she never did cry. She was too hurt to cry.… You know, a heart can be broken, but it keeps on beating, just the same.”

“People cain’t help being what they are any more than a skunk can help being a skunk. Don’t you think if they had their choice they would rather be something else? Sure they would. People are just weak.”

It’s got a little bit of mystery, a little bit of romance, a little bit of history, so it’s a book that can please people looking for all sorts of things. It was also a very fast read for me. Probably because I had such a hard time putting it down. It’s peppered throughout with little bits of southern-style wisdom, and beautifully, at the end of the book, it’s also dosed heavily with recipes you’ve been reading about through the book, including one for fried green tomatoes.

Worth a read, and would be a fantastic vacation or beach book!