“He didn’t need someone to fix the problem – there was no fixing it. He needed someone to acknowledge his feelings. Accept his pain. Agree that his heart was broken, and that it should be. And that it might stay broken for a long, long time.”

This book tried to make me cry. It didn’t quite get there.

Five days left is two stories. It’s the lives of two friends, who know one another through an internet forum.

If there’s anyone out there that “gets” internet forum friendships, it’s me. I have a group of ladies I am so, so very close to. We all met on a bath products forum (I know, I know, but I’m serious) more than ten years ago. We have cried and grieved with each other, laughed and rejoiced together, had reunions and hung out, and managed to keep in touch from all over the world for so many years. And much of this book is about those relationships. It’s about how people online can be closer than anyone else in your life, how they know you and root for you and are there for you at 3 am. And I think if you “get” that, you’ll “get” this book – and if not, no, it’s not going to work for you.

“Scott’s friends on the forum didn’t know his big picture. They read a phrase like “It’s going to kill me to live without him” for its precise meaning, and nothing else. They didn’t read more than those nine words into the message. They didn’t take offense, didn’t try to talk him out of it. Didn’t resent it for its presumed relativity.

“Of course it is,” they said. And it was the same way they’d responded to every other thing he’d told them about himself: his thoughts on parenting, on marriage and sex, on education and race. They read what he wrote, and only what he wrote, and they responded. Not always in agreement – he’d had plenty of heated discussions over the past year on this issue or that. But he didn’t need yes-men any more than he needed someone to read twenty-one extra words into the nine he’d written.” 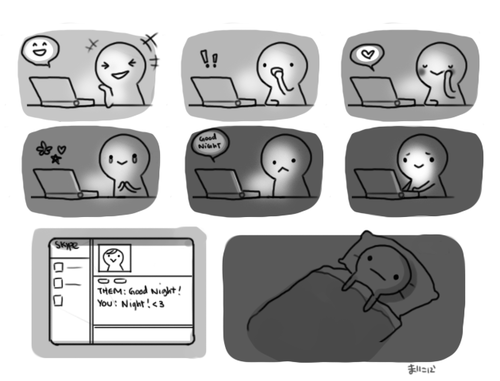 Scott and Mara are internet friends. They each have five days left before their stories come to an end, and neither is sure what will happen after that. Mara, a lawyer, wife, and adoptive mother, has Huntington’s disease, and it is slowly robbing her of everything that makes her life worthwhile. She’s made a promise to herself that she won’t become a burden to those that she loves, and has decided to end her life on her next birthday. But how can she leave the husband that loves her so madly and the daughter that needs her so much and her parents that give her incredible support behind? Scott has spent the last year as temporary guardian of a 9 year old boy. After years of struggling with infertility, his wife is pregnant and their dreams are coming true – a family of their own. But in five days, the boy he’s been taking care of is scheduled to return to his bio mom, and he doesn’t want to say goodbye.

I really enjoyed this story, though I felt as though some of the more emotional moments in the book were a little bit forced. It didn’t go as much in-depth into some of the issues as I would have liked. The characters are likable, but some are a little bit flat, once you get beyond the main characters. Even the spouses sometimes don’t have quite enough depth.

This was a pretty quick read – three sittings and I was done. It kept me engaged and interested in the story, though I did wish there was more depth to the story. I felt like I was supposed to feel more – as I mentioned above, I feel like the book was trying to make me cry (and I’m a pretty easy cry…) but it didn’t quite get there.

As this was a debut novel, I do think I’ll look for more from this author, because I think as she develops her voice her books will gain depth and greater perspectives on the world she creates.