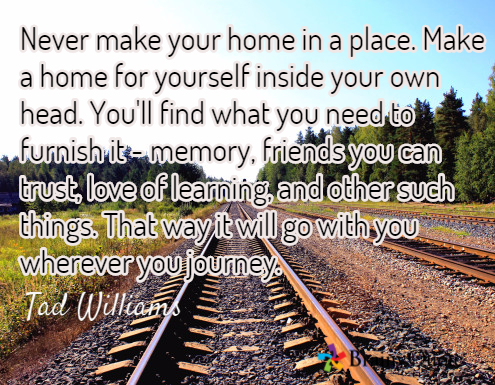 After being on vacation for three weeks, I am so very happy to be home.

Sure, home is just a place, and has been many of places to me, but more than that, home is where those you love reside.  And while the primary love of my life, my husband Richard, was travelling with me, I left four little loves behind.  And seeing them again was fantastic. Miss Ivy had a reaction like those dogs greeting their homecoming soldiers.  There was much huffing and squealing and yipping and licking and mouthing our hands.  Richard took her for a long walk to get out some of her energy and she passed out and slept for about 24 hours straight.  I was starting to get a little worried about her, but she seems fine now!  She used to always travel with us, but hasn’t been able to as she’s gotten older – she’s about 14 – 15 now (she’s a rescue dog so her age is a little uncertain).  More than happy to have us home, she’s been a dedicated snuggle-bug, getting anxious whenever anyone leaves the house.  Or even the room! the most when we are away!  She is so shy that she often doesn’t like to get attention from others.  If we go away for only a day or two, she’ll sulk and ignore us when we come home.  But if we are gone for longer, she is all about the attention.  She in particular hasn’t left my side, and is constantly pushing her sweet, soft little head into my hands for attention and petting.  She attempts to “hold me down” when I need to get up from sitting with her, grabbing on (with claws!).  I understand.  This is why she gets carried to the bathroom, LOL! George is always such a big lump of love that it’s hard to tell the difference, whether he missed us or not!  One thing is for sure though, he’s missed his brushings.  His thick, long coat is a mess!  I’ve been combing matts out of him since we got home, going in short sessions several times a day.  He hates it – probably is less than happy for that, but it’s pretty obvious how much he needs it and doesn’t do well when we are away!  I don’t know if it’s all the lack of brushing or if his self-grooming suffers too when we’re gone, but this is the longest we’ve left him, and the poor boy is a mess!

And then there is our sweet baby Onyx. Silliest little  thing on the planet, this one.  He’s been super-affectionate since we got home – even with Richard some, which is unusual!  He doesn’t seem to like anyone male (since the boys treated him so very badly, this isn’t much of a surprise).  And that has extended to Richard, but I think there was a bit of a forgiveness thing going on after we were away.  He is particularly clingy and has a fit if he gets shut out of the bathroom right now, and has even been spending some time in the bed with us at night (which he never did previously).

I am so incredibly grateful to be home with them again!  They have made my week!