I re-read many of the Odd Thomas books of late, and then took a little break from them after Odd Apocalypse as I was getting a bit burned out on the character. But I realized just how much I missed him when I started reading again.

My adoration of the character is the main reason I love these books so much. Odd is a funny fellow; sincere and all-too-often more serious than he should be, humble and with an ironic sense of humour. I would like to have a chat with him. He’s one of those book characters that you think you’d be really good friends with.

That said, I really wouldn’t want to hang out with him for too long, because really awful, terrible, no good very bad things are always happening to him, and this is no exception.

This book plays with reality a little bit, in the way that Koontz often does as an author. There’s the hint at a parallel universe or another dimension that’s been hinted around at in other Odd Thomas books as well as in other Koontz books in general. Some consider this a trope in regards to a “bigger message” in the novels, but I read Koontz books for entertainment and don’t search them for hidden meaning.

I think it’s just for fun.

In this installment of a series, Odd has his head turned by a ProStar big rig, and stops to take a look at it. This turns out to be a very bad idea. 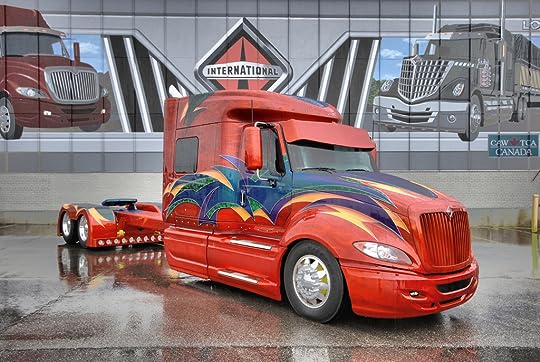 “In life, little happens by chance, and most bad hands we’re dealt are the consequence of our actions, which are shaped by our wisdom and our ignorance. In my experience, survival depends on hoping for the best while recognizing that disaster is more likely and that it can’t be averted if it can’t be imagined.”

There is an absolutely fantastic new character in this book that I completely adore – Mrs. Fischer. She’s an eighty-something old-not-old lady who has certainly been around the block a few times and has some fantastic stories of her own. She’s not afraid of much, knows all the right people in all the right places (like gun dealers in the desert and cops in areas you might be speeding and the like), carries things like spirit gum and mustache disguises and guns in her purse, and always seems to know the right thing to say.

“If an eighty-six-year-old woman has been clear-seeing from a young age, she will have gone through a lot of life developing a keen eye for snares and pitfalls, an ear for deceit, and a good nose for knavery. And by such an age, a smart woman with no illusions is one to whom courage comes far more readily than it does to those young people who don’t yet know the world for what it is.”

She hires Odd as her chauffeur, since hers has recently died, and proceeds to drive him everywhere, since he is far too cautious of a driver for her.

There are some notable bad guys in this book, including one that I have a feeling we’ll see more of, though I kind of hope not. He’s either the devil or the embodiment of darkness or just everything that’s bad, and he’s chosen to become the reflection of Odd. Disconcerting to say the least.

“There’s just something unsettling about studying your reflection. It’s not a matter of being dissatisfied with your face or of being embarrassed by your vanity. Maybe it’s that when you gaze into your own eyes, you don’t see what you wish to see—or glimpse something that you wish weren’t there.”

Odd’s world is going to hell in a handbasket, and I honestly thought we were going to see the end of it in the last book (because the title – Odd Apocalypse – I mean come on!) and that after we were going to be living in some post-apocalyptic weird little dystopia, but that hasn’t happened yet, though there are more hints that it’s just around the corner. Or maybe Odd just thinks it is, because his world ended in a mall in Pico Mundo at the very start of the series, poor guy.

I think part of what I love about him is that he’s so love-sick, poor guy.

If you like the rest of the series, you’ll like this one. But if you haven’t read the others, go back and start at the beginning. There is way too much to catch up on at this point, too many references to people and places and things from the long ago. There are also massive amounts of pop culture references here, which may date the book in not too many years, but for right now, it’s a fun and up to date read. I highly enjoyed it!