A Discovery of Witches by Deborah Harkness
My rating:

Thank you to my friend Devon for recommending this series to me!

I borrowed the audio book version of this from the library for our recent trip. We like to listen to books on long car trips, and this one (three days in the car each way) was definitely a long trip, and this was a very very long audio book to listen to on the way! It’s sometimes hard finding books that fit both of our interests, as my husband primarily reads fantasy and I read mysteries, general fiction, historical fiction, horror – pretty much anything BUT fantasy! Something like this that blends several genres usually works for us.

A Discovery of Witches is about – surprise surprise!!! – witches. And vampires, demons, and assorted vanilla human types, magic, trickery, prejudice, family, history and basically, when it all comes down to it, it’s about self-acceptance. We all have parts of ourselves that we aren’t happy about, and Diana is no exception. She was born into a family of witches, but has eschewed using magic or learning spells her whole life, choosing instead to become an academic. That is, until she somehow magically unlocks a protective spell on a book at the Oxford library. 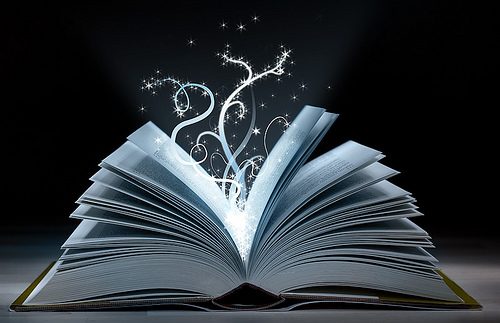 “The strongest distinguishing characteristic of humans is their power of denial.”

And then, basically, all hell breaks loose. Vampires and demons and witches descend into Diana’s life. They all want something from her, all revolving around the book, except maybe for one – a rather sexy vampire who seems to want to protect her more than anything else, who even steps between a witch and Diana to protect her, in a world where meddling in the business between other classes of creatures is verboten.

“Yes, I see that you are behaving like a prince but that doesn’t mean you won’t behave like a devil at the first opportunity.”

Together, they find a way to navigate Diana safely through the dangers that surround her. But by spending so much time with each other, of course they inevitably fall for each other. This is about the time in the book that my husband started muttering about sparkly vampires, but I will assure you now, Matthew definitely doesn’t sparkle. He is pretty angsty for someone as old as he is, though, even if he does have the romance game down pretty well.

“Wordlessly I looked back at him, astonished that a kiss on the palm could be so intimate.”

There’s a lot of other stuff that goes on – no big deal, you know. Like war, scary flying kidnappy witches, and a surprise about just how vampires get married. But I’ll let you read the book to experience all that.

Overall, this is a good read, though my favourite character – a lovely British demon named Hamish – didn’t get nearly enough “screen time”. I found the main characters annoying a lot of the time, and the secondary ones much more interesting. I have high hopes that they will feature strongly in future books in the series. The book is long, and gets a bit draggy in paces, as well as having some unnecessary scenes, which is why I dropped it by a star. There were sections of the book that I was sure I’d end up giving 3 stars to this one, but it eeked out a little more love thanks to several unforgettable characters that I really liked, including a vampire mom, her housekeeper, an annoyingly bitchy female vampire and a lesbian witch couple.  And the house – my god, that house.  I would love to live in it, and it certainly qualifies as a character on it’s own merit.  They shone far more brightly than the others, and will have me coming back for more.